Websites are invaluable touchpoints in the modern business landscape. Before making a purchase, up to 80% of consumers research a business online.

The ability of websites to build brand trust and drive conversions is thanks to advancements in website development. From basic text-only pages, today’s websites can support a myriad of features while delivering a memorable user experience.

Innovations in technologies like HTML, CSS, and Javascript widened the horizon to experiment with visual design and functionality.

Building a website or app involves two types of development: frontend and backend development. In this article, we outline their differences and the basic concepts that go into their code.

What is the Difference Between Frontend and Backend Development?

Frontend development deals with user-facing elements, whereas backend development is concerned with the server, application, and database of the website.

When you’re scrolling and clicking through a website, you are interacting with its frontend or user interface. The text, images, animations, and everything else that appears on your device are within this realm.

It is the frontend’s job to organize your requests and present information in a way that is appealing and easily understood. 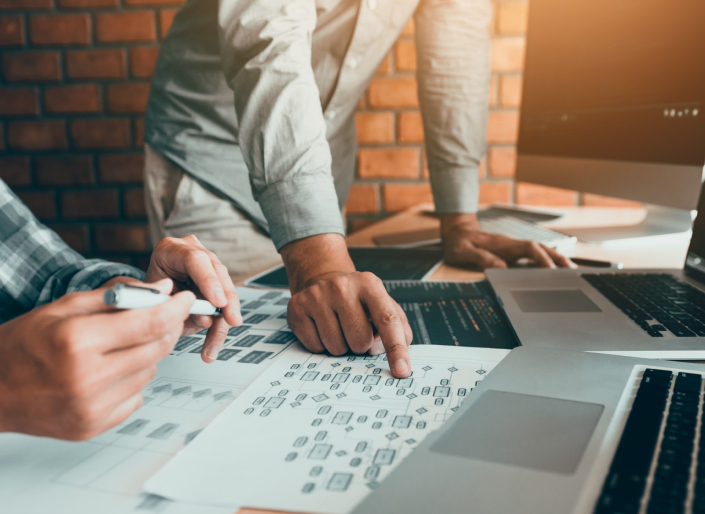 In contrast, backend development is what governs all functions and processes.

When you click on a link to a product page, for example, the website pulls data behind the scenes and sends it back to the user interface. Where that data is stored and managed plus the connection to the client-side comprise backend development.

The code utilized in backend development is the backbone of the entire website and powers the web application itself.

Frontend development is all about making a website or app accessible and visually-pleasing to users. Essentially, the frontend has three main tasks.

The first is getting information from the backend and bringing it upfront. In doing so, the client-server must translate backend language to the specific operating system language used by the website or app.

Secondly, the frontend must be able to display requested information in a manner that users understand. Frontend developers work to transform ones and zeros into digestible and organized content.

Finally, frontend development dictates the aesthetic shape of the website or app. Although it is closely related to web design, the two fields are not the same.

Web designers and graphic artists layout and supply the elements of a site, but all these remain static without frontend developers. They are responsible for bringing graphics to life and executing the technicalities of aesthetic design.

The first two functions of frontend development are based on the logical layer of the work process. Gathering and processing data requires the frontend to communicate with the backend through what we call an API (Application Programming Interface). 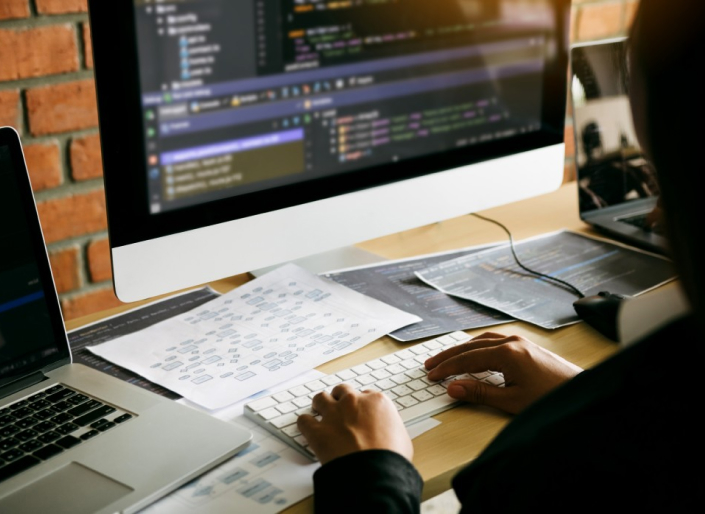 The API acts as a messenger between the two servers, fetching your requests and delivering them back to the user interface. However, it is only an intermediary software. Frontend developers are the ones responsible for specifying how data must be sent back and how it appears to the user.

Both the logical and aesthetic layers of frontend development are made possible through a combination of coding languages and tools. Among the most popular are:

Hypertext Markup Language (HTML) is used to organize a web document. It is considered the core of a website, providing the general structure for functionality and design.

The different elements of a web page are represented by a series of shortcodes called tags. Each tag can be modified to have various qualities and behaviors through markups. For example, text can be bold or italic depending on the code snippet placed next to its HTML tag.

You can also redirect users to other HTML documents using hyperlinks. Once you get a hang of HTML coding, you can gradually move on to HTML5. The latest version of the markup language allows more content elements and attributes and supports audio and video embedding.

Cascading Style Sheets (CSS) is a specialized language used on the aesthetic layer of frontend development. It communicates with HTML elements to define dimensions, color, and style.

CSS makes use of selectors to determine which HTML tag it will manipulate. Setting values to properties impact selected elements without having to change your original HTML code.

The flexibility CSS affords frontend developers is unparalleled. External style sheets allow you to tweak the look of an entire website by uploading a single .css file. In addition, recent updates include features that help you gain control of more complex elements like animations.

JavaScript is the most popular language used in both frontend and backend development. It is best known for making websites dynamic and interactive with custom pop-ups, extensive navigation menus, and other UI components.

To make coding simpler, JavaScript is used hand-in-hand with frameworks. These templates serve as the scaffolding on which the basic functions of a website or app is built. Some of the most well-known frontend frameworks include Angular, React, and Vue.js.

JavaScript libraries are also vital tools when working with the event-based language. They are a collection of pre-written code snippets that can be used and reused on different web development projects. The function of each snippet ranges from enabling simple dropdowns to creating more responsive and sophisticated elements. 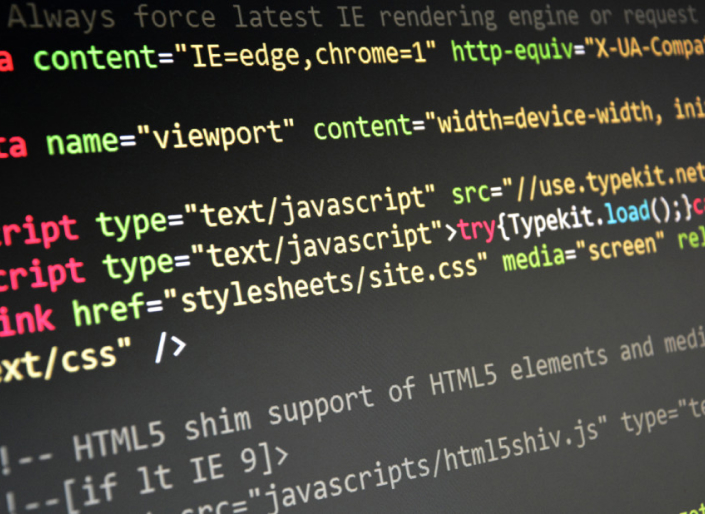 The backend side of a website is comprised of powerful sets of technology that process and respond to user requests.

The backend side of a website is comprised of powerful sets of technology that process and respond to user requests. More specifically, it is made up of servers, the app, and a database.

Servers are high-performing computers that receive commands from the frontend. Once a request is in, the application is prompted to execute functions necessary to fulfill its requirements.

At this point, the app matches an HTTP verb to the correct URI (Uniform Resource Identifier) in a process called routing. This ensures that a request is being handled by the appropriate pieces of code.

Finally, the database is tapped for more information and a response is sent out to the client’s end through the server. The database is also used to store incoming data and relieve memory load from the main server CPU.

Programming on this side of the system is called backend development. While the primary task of backend developers is writing server scripts, their work goes beyond just accommodating HTTP requests.

Backend developers set up proxy servers, compress file sizes, and optimize algorithms to speed up loading time and boost efficiency. They are also in charge of making sure the website or app is stable and secure.

The extensive world of backend development is coupled with a vast selection of programming tools and languages. These include:

Java is an object-oriented programming language. Instead of writing code for tasks, developers create virtual objects with specific attributes. These objects can work on their own or interact with other classes to perform more complicated functions.

Although Java can run on any platform, it requires the Java Virtual Machine (JVM) to be present on the target device. The JVM translates compiled source code into a language that a machine can understand, allowing it to act in line with the code’s logic.

Java comes with a powerful API that empowers the backend system to handle multiple tasks, complex data structures, sorting algorithms, and more. It is also known for its exceptional data management and robust security.

Similar to Java, coding with Ruby on Rails is object-based, though much more flexible. Ruby uses dynamic typing wherein variables aren’t restricted to a particular type. Its syntax is also a lot simpler, throwing away the need to always end with a semicolon or enclose everything in parentheses.

In Ruby, you can add, remove, and customize elements with ease. It boasts a plethora of ready-made plug-ins so you don’t have to manually write boilerplate code. At the same time, experienced developers have the leeway to stray from conventions and make components entirely their own.

What’s more, Ruby on Rails has a built-in testing tool for bug-free development. With the Minitest tool, you can take advantage of expectation syntax, test benchmarking, and mocking.

PHP is an open-source scripting language used by giants like WordPress and Facebook. It previously stood for “Personal Home Page” but is now known as “PHP: Hypertext Preprocessor”.

Unlike Java or C#, the interpreted language can execute commands without first compiling its code into machine language instructions. This makes it easy to implement small changes to your script and immediately see how it affects subsequent requests. 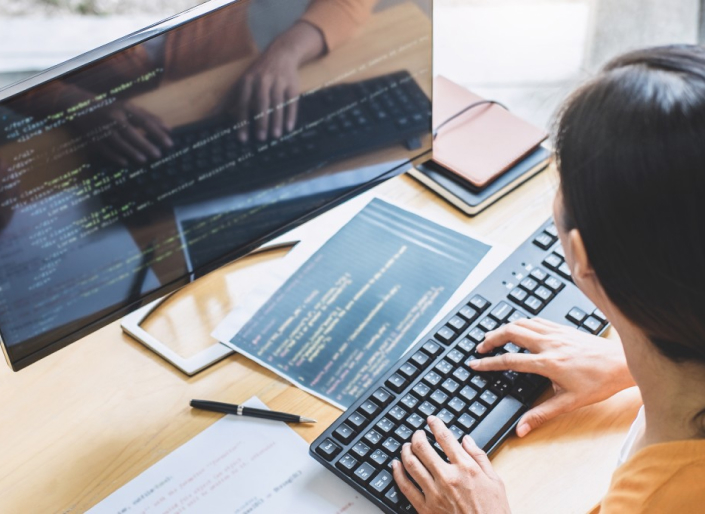 PHP features a built-in error reporting system and an extensive library for traversing and sorting data. It can also be integrated with other databases and is not case-sensitive when processing keywords, methods, and classes.

Frontend and backend development are equally important determinants of a successful website or app. With advancements made every day, you have more to work with to build your digital home.

Outsource your web development project to work with seasoned frontend and backend developers. Get in touch with DevWerkz today.