In the 1960s, Eric Johnson designed and patented a machine that detects changes in electric charge triggered by touch. The invention was called a capacitive touchscreen—the first piece of touchscreen technology in the world.

Touchscreens became more popular as companies released handheld devices. Personal digital assistants (PDAs) were extremely popular in the business world, but it wasn’t until Apple introduced the iPhone did the technology truly explode.

Today, touchscreen devices are everywhere, fueling the shift from desktop surfing to mobile use. In this blog, we’ll go through 7 ways you can improve your online platform for smartphones and tablets to edge out the competition with a better UX/UI design.

1. Use a responsive design 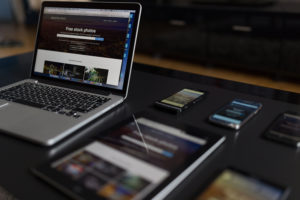 First and foremost, designing for touchscreen devices calls for a responsive web design. Smartphones and tablets come in a variety of sizes. Your website or web app should look good and be easy to navigate on all of them.

Test your platform on different types of gadgets and ensure that your layout renders and functions well on portrait and landscape.

Although stylus pens are having a comeback, most touchscreen devices still rely on finger touch for navigation. Compared to a cursor on a screen, finger touch is less accurate and harder to pull off if you don’t know what you’re doing.

When designing mobile pages, avoid fitting too many elements into the viewport. This will make your design crowded and compromise the size of buttons, links, and others.

Target touch elements must be large enough for users to interact with effortlessly. Meaning, they should be able to accommodate the size of an average finger.

Moreover, provide adequate space between touch elements so that users don’t trigger other events unintentionally. Wrong clicks—or in this case, wrong taps—are extremely frustrating and could increase your bounce rate. 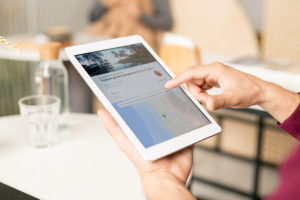 Text input is considered one of the greatest hurdles to mobile accessibility. Touchscreen devices lag behind physical keyboards in terms of ergonomics. Switching between letters, punctuation marks, and other symbols is harder to do on a smartphone than it is on a desktop.

The best we can do is to minimize the need for users to input long lines of text. Reducing web form fields is a big help as well as providing more convenient ways to answer questions such as checkboxes, toggle switches, and sliders.

Because you have less area to work with, submenus can be difficult to open and close on mobile sites. Dropdown menus are especially problematic when the dropdown list is long and the scrollable area is too small.

Users might miss important information and web pages when these items are further along the list and hidden from plain sight. We also don’t recommend using dropdown menus for web forms.

Having to scroll through an endless list of possible answers is tedious. When deciding whether or not to use dropdown menus, always consider the expected input. Sometimes, manually entering a word or value is more efficient.

If there’s no going around it, limit the number of items on your list and prioritize which ones should appear first. Adding a “start typing…” feature is another solution so that users could get to their desired option faster.

The hover function doesn’t exist on touchscreen devices. For the most part, leaving them on won’t mess with the functionality of your website. But sometimes, hover effects could hide elements on mobile pages and alter the double-tap behavior on iOS touch screens.

It’s best to avoid these risks and remove hover functions from your mobile site altogether. The best alternative is to include the hover information directly on the web page. This requires you to trim down your captions and/or redirect users to the complete information with a text link.

On small touchscreen devices, interacting with the UI requires minimal movement. Unless users are typing lengthy paragraphs, it’s usually just the thumb doing most of the work.

But for larger touchscreens like tablets and monitors, it takes more effort to tap faraway elements. For example, if your web app has its menu button way up on the corner of the screen, users would likely have to change the position of their hand and extend their arms while using their gadgets. 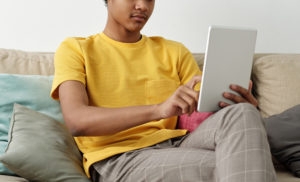 Although it doesn’t seem like a big deal, repeating these movements results in cumulative fatigue and dissatisfaction. To address this, take advantage of the larger touch-sensitive surface and make use of course gestures.

Examples of course gestures include full-hand pinch, multi-finger swipes, and crank motions. These movements allow the entire screen to serve as a control pad so you can do away with special buttons and links. The result is a more user-friendly and accessible UX/UI design.

Finally, we want you to consider haptic feedback. This refers to a physical response, usually a vibration, generated by the device to the user. It’s commonly applied to video games to increase accuracy and input speed on top of providing an immersive gameplay experience.

On websites and web apps, haptic feedback can be set to let users know that their input was registered. It can also be used to signal an error in the information a consumer has entered.

Users with visual difficulties benefit from haptic feedback the most but even average users can draw satisfaction from this feature. Light vibrations increase input speed by up to 20% and reduce errors by about the same margin.

Haptic feedback has little impact on power consumption but it still costs energy to produce the vibration. It can also get annoying if it’s overdone, so be mindful of applying haptic feedback to your touch elements. Only use it if it can truly add value to the user experience.

Improve Your Mobile Site with DevWerkz

Implement these tips and more when you hire our team of professional web designers and developers. We specialize in building beautiful and robust websites and web apps for various industries. Contact DevWerkz today.